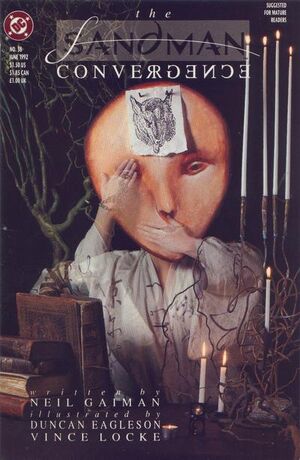 Do you know how long it's been since I mislaid a book? Well, let's just say the continents weren't in their current shapes, not that that means anything to you.

A man from Poland tells his granddaughter Celeste the story of a young boy named Vassily from the old country, who encountered a Romany Gypsy peddler in the forest. He was kind to the woman, but his father found him and warned him against associating with outsiders. The boy could not help his curiosity, and returned to find her again. After a time, she gave him a locket with a picture of the duke's daughter in it. She asked to tell his fortune, but when she did, she was so horrified by what she saw that she ran away.
Eventually, the boy became so obsessed with the girl in the locket that he could no longer take pride in his work. So, he ran away from home, taking what few possessions he still had. On his path through the woods, Vassily discovered the gypsy woman's body; she had already been dead for some time. He collected her goods, and took them in to the next town, claiming to be a peddler himself. At a local inn, the innkeeper suggested that the forest was populated by monsters, and doubted Vassily's having come from there. That night, the boy slept on the floor, and in doing so, narrowly escaped being murdered by the innkeeper. Afterward, he killed the innkeeper, and took his money back.
On the road, Vassily encountered a tall and thin man, who inquired about a book that he believed the boy was carrying. He asked the boy his price, and Vassily responded by showing the picture in the locket: the duke's daughter. The thin man could not pay that price, and so Vassily walked away. When he looked back, the thin man was gone.
Three days later, Vassily arrived at the edge of another forest, only to meet the tall man again. The man offered a sack full of gold in exchange for the book, but Vassily did not want gold. Frustrated, the man allowed Vassily to leave with the book once more.
One night, Vassily tracked a dear into a forest, but it was caught by a girl before he could catch it. He asked to accompany her back to her people and she allowed him to go with her to their encampment. There, he met Baba Yaga, who was intrigued by his offer of the emerald heart of Koschei the Deathless in exchange for passage to the duke's palace.
Upon arrival there, he was greeted by a man in a powdered wig who treated him like an honoured guest, and led him down some steps to a waiting room for meeting the duke's daughter. The man was lying, of course, and he trapped Vassily unwittingly in the duke's dungeon. After some time of waiting, Vassily was visited again by the tall man. Even though he was likely to die soon, the boy refused freedom. He wanted only the girl.
Frustrated again, the man took the boy through a magical door to a strange castle. They tried to sneak through the castle, but the man's master, Dream caught them easily. The tall librarian admitted that he had lost a book from the great library. After Vassily told the lord of dreams his tale and his price, Dream had the boy return the book - a copy of Christopher Marlowe's 'Doctor Faustus' - and then they travelled to the bedroom of the Duke's daughter.
The girl was sleeping in her bed, dreaming. Vassily saw that she was very beautiful as he woke her. Now that he had seen her, Vassily handed her the locket. Turning to dream, he expressed his hunger, and asked to be taken from there. Dream had him fed, and afterwards, the boy woke in the forest. One night, he travelled the forest in the shape of a wolf, and found his mate - the girl who beat him to the deer earlier. They lived happily ever after.
After the story is finished, Celeste believes that it was a parable meant to discourage her from dating her current boyfriend. Her grandfather explains that the story was true, and it was really about why the boy had turned his back on the duke's daughter. Closing the door on her, he tells her that he wishes she could have met her grandmother - she had never let him forget that she had beaten him to the deer.

Retrieved from "https://heykidscomics.fandom.com/wiki/Sandman_Vol_2_38?oldid=1456717"
Community content is available under CC-BY-SA unless otherwise noted.