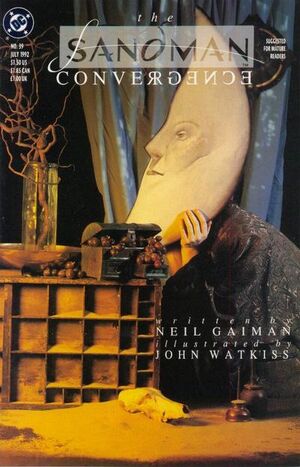 It is not important. It has happened already, or it is still to come. And forewarned is seldom forearmed. Not even in the shifting zones.

Separated from his father and uncle, Marco Polo wanders the Desert of Lop, trying to find his way back to the caravan. Eventually, parched, he collapses in the sand. He remembers that his mother once told him the legend that when he sleeps, the sandman pours magic sand into his eyes, and that is what he rubs out of them in the morning.
Rising, and wandering once more, Marco hears voices singing unfamiliar songs. He follows the voices, hoping they're those of his traveling companions. Finally, he hears a voice calling his name, and turns to see a man he does not recognize. The man asks him how he came to be there, and eventually, it becomes clear that the man, Rustichello da Pisa is from 30 years in the future, where he has already met Marco Polo, and is now recording the history of his travels. Each of them concludes that the other is simply a character in his own dream.
Eventually, the pair catch sight of a fire, and head toward it. They find a strange looking man, who welcomes them to sit with him. Rustichello hopes to have some dream-women and wine conjured for their enjoyment, but the man explains that he has actually come to this place in order to escape his master's frequent traipsing about with his current woman. He does, however, have wine.
Marco tells the tale of how he and his father and uncle had ventured to Cathay to see Kubilai Khan, and the Khan had demanded that they go back to the pope and return with 100 Christian miracle workers, who can match those miracles of his Buddhist priests. They went back to Italy, but the pope had no miracle workers, so they made their return to Cathay empty handed. On the way, they passed through the Desert of Lop, and now here stands Marco.
The strange man explains that they are in a dream of sorts; one of the world's "soft places", where the edges of dream and reality blur together. There are few remaining due to cartographers and explorers, who have made the earth stabilize its form. He himself is a soft place known as Fiddler's Green. After offering his new companions sandwiches, the strange man disappears, leaving the men alone in the desert. Likewise, Rustichello bids adieu to Marco, and soon the man is left alone, back where he started.
Suddenly, a pale, thin man appears nearby. Marco correctly guesses that this is the Lord of Dreams, and begs him for help. However, Dream has just managed to escape from his long captivity, and so lacks the power to help Marco. The man offers Dream the last dregs of water left in his flask, and Dream is moved to use what little power he has left to return Marco Polo to the real world and his family.

Retrieved from "https://heykidscomics.fandom.com/wiki/Sandman_Vol_2_39?oldid=1456718"
Community content is available under CC-BY-SA unless otherwise noted.