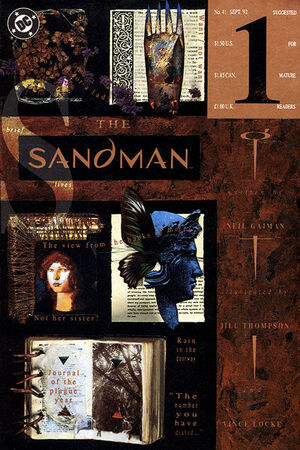 Are you sure you won't change your mind? I mean Dream's much spookier than you are. And I'm always scared he's laughing at me, behind his face.

On a remote island in Greece, Andros Rhodocanakis is one of the last of a group of monks who protect the location of the head of Orpheus. Every spring day, he walks up a hidden path which leads to the grave marker of Johanna Constantine, lays a flower on it, and then checks in on Orpheus. As he now does this, his father and grandfather did so before him.
In London, a chatty homeless woman begs for change, and comments to a passerby about the sad state of affairs when a young person like her companion ends up on the streets. Her companion is Delirium, who is blithely oblivious to the dangers of being a scantily clad young woman on the streets when it looks as though it will rain soon. When the older woman suggests that she go back to her parents, Delirium recalls that it is not her parents who left her, but her brother. She decides that she should seek him out, and nonchalantly gets up and walks away, desiring change.
Delirium talks her way past a bouncer at a local S&M club, and walks inside. All the while, she struggles to remember what the jelly-like substance inside the human eye is called. Inside the club, she encounters a woman whom she thinks bears a strong resemblance to her older sister Death. When she realizes it is not her sister after all, she is disappointed, and moves on. She wanders over to a couple sitting at a table, but her general confusion suggests to them that they should get her to a doctor. Before anything can be done about it, Desire appears, and promises to look after her.
Desire takes Delirium back to its domain. Delirium wanders into her sister-brother's gallery, complaining that she misses her older brother very badly. She asks whether Desire knows where he is, but she does not, and nor does she care. Moving through the gallery, Delirium stops at Destiny's book, and wonders if Destruction's location is somewhere written in it. Finding little help from her sister-brother, Delirium calls on Despair to give her entry to her domain.
Delirium finds Despair looking through one her numerous windows at a man whose wife has just left him after discovering that he had created child pornography with his niece. Despite having come this far, Delirium is reluctant to ask her sister what she has come to ask. Instead, she asks what the jelly in human eyes is called, and Despair responds that it is called 'vitreous humour.' She refuses to get to her point unless Despair promises not to use a certain voice that makes her uncomfortable. Finally, she asks whether Despair will help her find Destruction. In giving her answer, Despair draws her own blood with a barbed ring from her finger. She says no, simply, and Delirium decides to look to Dream next.
Despite what she said, Despair does miss her brother. To stifle the emotional pain, she stabs herself in the eye with the barbed ring, so that the vitreous humour within leaks down her face. She recalls the last time she was alone with her brother. It was during the time of the plague, and she had left her domain to personally visit London where pits were piled high with bodies of the dead. Destruction had appeared, pleased to see her out and about. He explained that things were soon to change, and that destruction is the agent thereof. Before long, he had to go already, and he kissed her on the cheek for the last time. The next time she would see him, he would be leaving forever.
Sadly, Despair ignores Desire's pleas to speak about the danger that Delirium's quest could pose.

Retrieved from "https://heykidscomics.fandom.com/wiki/Sandman_Vol_2_41?oldid=1456720"
Community content is available under CC-BY-SA unless otherwise noted.