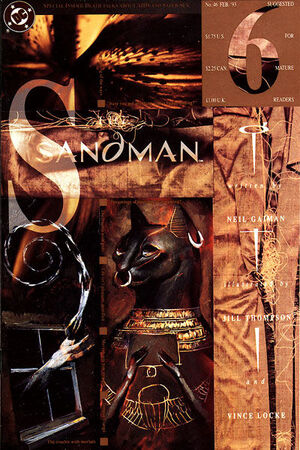 We do not have to do anything Delirium. All we have done thus far is bring death and damage to those we seek. No more.

In his place of hiding, Destruction - having given up his post 300 years ago - attempts the creative endeavour of poetry to limited success. His canine companion Barnabus is certainly critical. Destruction comments that he doesn't dream anymore, lest he give himself away to his younger brother. Barnabus doesn't know why Destruction is so worried about it, but Destruction responds that that is because he has never met his family.
After having travelled across the country, and witnessed the death of yet another of the people on Delirium's list of Destruction's known associates, Dream decides to call off the search. His sister is quite upset with him as a result, but he resolutely returns to the Dreaming, leaving her alone.
Upon his return, Dream locks himself in his throne room, and closes many of the doorways into the Dreaming. He informs Pharamond that he has finished travelling on earth, and apologizes for endangering his employee Ruby, who burned to death - likely as a result of the search for Destruction. Afterwards, he creates a new region within the Dreaming.
There, he meets with Bast, the Egyptian cat-goddess. He hopes that she can make good on her promise of two years ago to tell him where his brother is, as he suddenly thinks it may be more necessary than desirable that he find him. Unfortunately, Bast has does not truly know where Destruction is. She has news that sixty years ago, he was seen in Paris, but that is all. After rebuffing the cat-goddess' attempts to seduce him, Dream returns to his castle.
Later, Dream asks his librarian Lucien if there is any news on who might be behind the deaths of those people he and his sister had been involved with on earth. Lucien has no news, but he does note that something strange has occurred. In Dream's gallery, the window into Delirium's world has been blacked out. This is troubling. He calls on his elder sister Death to help him. Death is angry with him, knowing that he is likely responsible for whatever upset has caused Delirium to close herself off from the family. Eventually, she forces Dream to realize his responsibility, and he agrees to go to Delirium's world and set things right.
After his youngest sister condemns his treatment of her, Dream apologizes, explaining that he had selfishly agreed to join her search because he had secretly hoped that he would encounter the woman who had left him recently. Once things had become dangerous, he had decided to call off the search. However, now he understands that they must continue their search. After Delirium presses Dream to admit that he is fond of her, she agrees to return to the search with him as her partner.

Retrieved from "https://heykidscomics.fandom.com/wiki/Sandman_Vol_2_46?oldid=1456727"
Community content is available under CC-BY-SA unless otherwise noted.