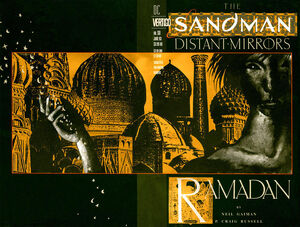 You have called me here, Haroun. It is unwise to summon what you cannot dismiss.

Caliph Haroun Al Raschid, King of Baghdad, lives in a beautiful city of wonder, enjoying the pleasures of his harem, and occasionally sneaking out in disguise to experience strange things with his friends. However, during the month of Ramadan, he becomes listless, wanting none of the pleasures that city or palace have to offer.
Finally, he descended deep into the lowest part of his palace, where he finds room after room of strange things. Finally, he comes to a magical orb, and collects it. Returning to the very top of his palace, he uses the orb to call upon the lord of dreams. He warns that if the Dream Lord does not come, he will shatter the orb, in which a number of evil creatures have been imprisoned. Receiving no answer, he heaves the orb above his head and tosses it out over the city. Moments before it makes contact with the ground below, a pair of pale white hands catches the orb.
Dream appears, and confiscates the orb, demanding to know why he was summoned. The Caliph explains that he would like to make a bargain, and in order to do that, they had best go to the marketplace. He fetches a magic carpet, and the two ride out into the city. Dream remarks that the city is a remarkable place. The Caliph Haroun wonders if Dream might like to buy it from him.
Caliph explains that he knows the city will one day fade. He worries that the wonder and beauty of his city will die. He wonders if Dream will purchase the city from him; take it in to the Dreaming. In exchange, he wants the city never to die. Dream responds that he can do this, if Haroun tells his people the plan. So, the Caliph gathers his people and tells them of his plan.


Not long after, the Caliph wakes in the market place with little recollection of his dream. He passes by a tall pale man and wonders what it is that he's holding. The man responds that it is a city in a bottle, but that it is no longer for sale. The Caliph returns to the crumbling, dusty palace as the pale man watches.

Appearing in "Facets of Dream"Edit

Synopsis for "Facets of Dream"Edit

Retrieved from "https://heykidscomics.fandom.com/wiki/Sandman_Vol_2_50?oldid=1456731"
Community content is available under CC-BY-SA unless otherwise noted.