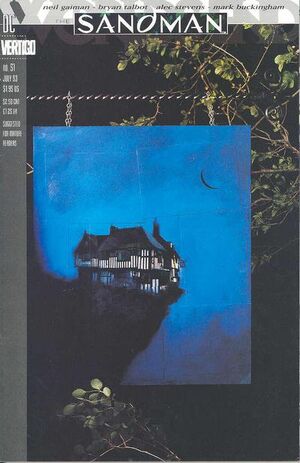 Appearing in "World's End (I): A Tale of Two Cities"Edit

Synopsis for "World's End (I): A Tale of Two Cities"Edit

Brant Tucker has volunteered to drive his coworker Charlene Mooney to Chicago for a sales conference. On the way, however, Charlene falls asleep, and Brant begins to experience dream-like hallucinations - or so he thinks. It begins to snow heavily in the middle of June, and suddenly a strange creature appears in the middle of the road, and he swerves. The car crashes, and Brant drags a grumpy Charlene out, hoping to get to the nearest town.
Eventually, Brant gets tired from carrying Charlene, and they collapse in the snow, with no hope in sight. Suddenly, Brant hears a strange voice which encourages him to continue on. After beginning again, Brant and Charlene arrive at a weird looking Inn called "World's End".
The patrons are just as weird. One of them - a centaur - claims to be a physician, and takes Charlene under his care. All of the patrons are stranded at the inn until the storm passes, but this is no ordinary storm - it is a reality storm. The next day, Brant wakes to find all of the patrons gathered around telling stories. One man tells a story which he calls a Tale of Two Cities.
In the story, a man named Robert works at a normal desk job, and he loves his city. He loves the atmosphere and the lights, and he spends a lot of time thinking about it. One day, he caught a glimpse of a silver road, and tried to follow it, but it went nowhere. Later, on his way home from work, he waited at the subway platform, and was greeted by a strange kind of subway car. The train's only passenger was a tall, pale man. The man said nothing, but when the train stopped, Robert found himself in unfamiliar territory.
The city he emerged in was not the same as the one he loved. It was similar, but it was unfamiliar. He wandered empty streets until one day he found an old man lying on a bridge. The man suggested that each city has a soul, and that this city is the dream of the real city's soul. The old man explained that he has been looking for a long time for anything familiar to hold on to. Suddenly, the man caught a glimpse of something, and ran off into an alley. Robert followed, but found the alley empty. He never saw the man again.
After some time, Robert met a woman, who was confused as to where they were and what was going on. Before he can utter a reply, he notices a doorway that seems familiar. He pushes her aside and rushes through it, only to find himself back in the real world, in his city.
Years later, Robert moved out into the country. He moved there, he claimed, not because he was afraid of falling into the city's dream again, but because of what might happen on the day that the cities come awake.
With his tale told, the old man turns to the others and asks "who's next?"