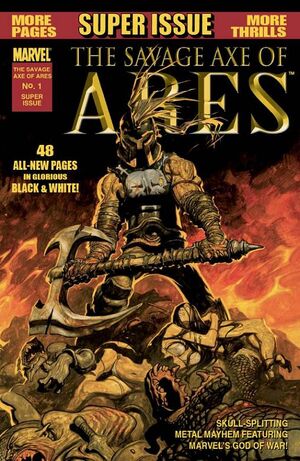 Ares, the greatest warrior the world has ever known, has lived for thousands of years, wandering the earth and waging war on his enemies. His acts and his axe are legendary and here, in stark black and white, are four tales of how he changed the world through violence. Through brutality. Through war… Don’t miss this all-new, all-action, all-black-and-white one-shot in the spirit of the Mighty Marvel Magazines of yore, but ALL-NOW in style!

Retrieved from "https://heykidscomics.fandom.com/wiki/Savage_Axe_of_Ares_Vol_1_1?oldid=1739618"
Community content is available under CC-BY-SA unless otherwise noted.