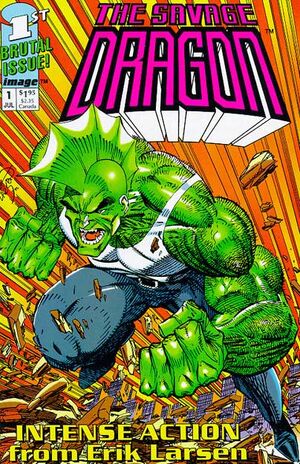 Appearing in "Baptism of Fire"Edit

Synopsis for "Baptism of Fire"Edit

Dragon leaps into action against Cutthroat and Glowbug to foil a bank robbery. Cutting to a flashback, we learn that Dragon had been found in a burning field by police Lieutenant Frank Darling with no memory of who he was or where he had came from. After working for Frank's cousin for awhile, Dragon was convinced to join the Chicago Police Department when members of the Vicious Circle blew up Fred's warehouse. Chicago had been overrun by the freak population and with the recent disfiguring of the hero SuperPatriot and the death of Mighty Man the town is in dire need of someone to make the city safe. Dragon is just the man for the job! Aided by the vigilatn Star, Dragon rescues a young woman from kidnappers.

Retrieved from "https://heykidscomics.fandom.com/wiki/Savage_Dragon_(Mini-series)_Vol_1_1?oldid=1463426"
Community content is available under CC-BY-SA unless otherwise noted.