Start a Wiki
Part of the 'Hawkman: Wanted' event 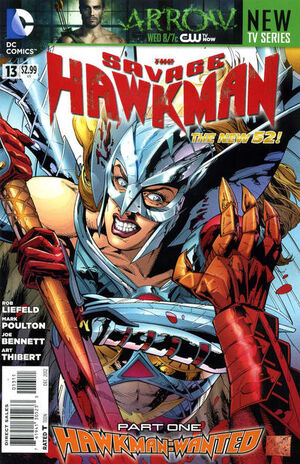 Appearing in "Hawkman: Wanted, Part One: The Enemy of My Enemy..."Edit

Synopsis for "Hawkman: Wanted, Part One: The Enemy of My Enemy..."Edit

After a short scuffle, Hawkman and Emma Ziegler are captives of Pike and Shayera. As the prisoners are being loaded onto Shayera's ship, a forceful blast hits them, and Xerxes and his guard appear, wanting Hawkman's Nth Metal armor. Xerxes realizes that Shayera's armor is similar to the armor that he is after, and orders his men to attack. Sheyara orders Xerxes to cease, citing that he is interfering with the apprehension of a criminal that is wanted for murder. Meanwhile, Emma finds a safe place to hide, and Pike decides it is time for him to take his leave. Hawkman takes the offensive and shows Xerxes what his armor is capable of. However, Pike decides that instead of taking off in the ship, he should try one last time to get the armor. Too bad for him that the ship was Emma's hiding spot, which he learns as she pulls a gun to his head.

Having the situation seemingly wrapped-up, Hawkman appeals to Shayera to remember the love they had and know that he couldn't possibly be the murder. Shayera strongly disagrees. The "bad guys" are left stranded by Hawkman, who blows-up one ship and takes the other. However, this will not be the end of things, as Xerxes and Shayera make a pact.

The story continues in Green Arrow #14.

Retrieved from "https://heykidscomics.fandom.com/wiki/Savage_Hawkman_Vol_1_13?oldid=1456795"
Community content is available under CC-BY-SA unless otherwise noted.