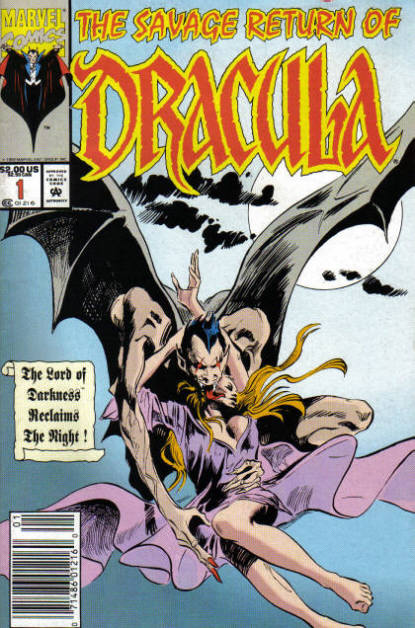 You've sealed your end, my friend -- for, whoever strikes Dracula -- strikes Death!

Frank Drake (Earth-616) has just inherited an ancient family castle. The castle is historically notorious as the ancestral home of the legendary vampire, Count Dracula. Frank, his friend, Clifton Graves, and girlfriend Jeanie, travel to a small village in Transylvania. Unable to traverse the mountain pass, they hire a coachman to bring them the rest of the way to Castle Dracula. Many of the locals are superstitious of the vampire legends, but the Coachman, Otto, doesn't hold to any of that and agrees to transport them.

They enter the castle, and Jeanie takes an immediate dislike to it. She becomes particularly apprehensive when a bat flutters by, frightening her. The three split up and decide to explore separate areas of the castle.

Clifton Graves schemes to arrange an accident for Frank, so that he can gain control of the castle. As he's wandering, he stumbles through a weak floorboard, and falls into a secret hidden chamber. Inside the chamber is the coffin of Count Dracula. Graves opens the coffin and finds Dracula's skeletal remains. A wooden stake is sticking upward from his chest. Cliff doesn't believe in the legend, so he pulls the stake out and turns to leave.

Dracula's physical form reconstitutes itself and he attacks Graves, hurling him into a deep cavern. He then takes the form of a bat, and flies upward towards another section of the castle. Upon finding Frank and Jeanie, he takes human form and accosts them. Frank manages to keep Dracula at bay by way of a silver compact. As the vampire is vulnerable to silver, he changes back into a bat, and flies out the window.

Dracula flies down into the nearby village, and attacks a barmaid walking home from work. Another villager finds her blood-drained body, and declares that she has the "mark of the vampire" upon her. More villagers gather together and form a lynch mob.

Dracula returns to his castle and assaults Frank once again. During their struggle, he discovers that Frank is actually one of his own direct descendents. Frank hurls the silver compact at him, striking Dracula in the head. Dracula lunges at him and grips him by the throat. Jean tries to defend her lover, but she falls prey to Dracula's hypnotic commands.

Meanwhile, the lynch mob arrives at the Castle and set fire to it. The flames quickly rage throughout the building, and Frank is forced to find cover. Dracula takes the opportunity to attack Jeanie and drinks her blood. Frank manages to get her away from Dracula, but it is too late. She is now a vampire. Dracula flies away, and Frank pulls the vampire Jeanie out of the burning building.

Appearing in "The Fear Within"Edit

Synopsis for "The Fear Within"Edit

Retrieved from "https://heykidscomics.fandom.com/wiki/Savage_Return_of_Dracula_Vol_1_1?oldid=1511465"
Community content is available under CC-BY-SA unless otherwise noted.