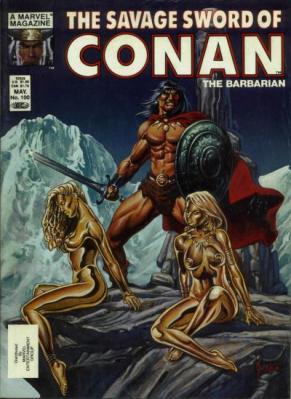 Appearing in "When a God Lives!"Edit

Synopsis for "When a God Lives!"Edit

Conan's trip to a fence to pawn a stolen statue turns into a fight as soldiers raid the store. Conan manages to climb up to the roof and flees on a purloined horse, which unfortunately collapses from exhaustion. Conan scrambled up the hills as the guards give chase and fire arrows, and the Cimmerian topples a cliff into the forest vines below. After a night's rest, Conan is annoyed to discover his pursuers have circled the mountain and are still on his trail. As the soldiers are mysteriously picked off one by one by traps, Conan is approached by a band of displaced Kushites, who name him "Amra, the Lion," before they attack. By virtue of sheer numbers they capture Conan and bring him to their village of mud and straw huts, intending to sacrifice the barbarian. Conan is taken before the Kushite's goddess, Persaphne, who demands to know why Conan is trespassing. In a rather astonishing coincidence, the statue that Conan had stolen in Arenjun happens to be the long-missing idol of Uggrahk, the bat-god of the Kushites. The shaman-priest Kwasuthu condemns Conan to death. Later, a bound Conan is approached by Persaphne, who reveals she was kidnapped as a child and used as a figurehead by Kwasuthu. Conan almost succeeds in seducing the young woman into releasing him, but they are interrupted by the Kushites who have captured the remaining soldiers. Conan and the Arenjun soldiers are tied to a stake in preparation for sacrifice to Uggrahk, but Persaphne sneaks a dagger into Conan's hand. While the Kushites chant, Conan frees himself and the soldiers, and jumps into the throng of Kushite midgets, followed quickly by the soldiers. Unfortunately, the return of the idol causes Uggrahk himself to manifest, in all his bat-headed, snake-bodied, scaly, tentacled glory. The shaman-priest is crushed under his demon-god's body, and as the temple collapses, only Conan and Captain Helm flee alive. Helm praises Conan for his bravery, thanks him for his assistance, then tries to arrest him. Conan, tired of the whole thing, bitch-slaps Helm into unconsciousness and wanders off.

Retrieved from "https://heykidscomics.fandom.com/wiki/Savage_Sword_of_Conan_Vol_1_100?oldid=1451898"
Community content is available under CC-BY-SA unless otherwise noted.