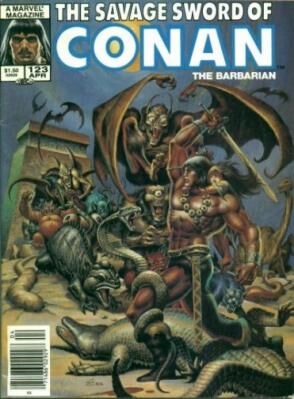 Appearing in "Secret of the Great Stone"Edit

Synopsis for "Secret of the Great Stone"Edit

While traveling on the snow-topped Kezankian Mountains, Conan is set upon by bounty hunters. Conan holds his own but ends up toppling over a cliff-side and breaking through to an ice cavern below. He is observed by two hideous witches, Shaalu and Veena, who seem to be intent on using Conan for their own purposes. The witches manipulate Conan through the cavern passages to a hot spring, where Conan dispatches a giant worm, and out to an inhabited valley where Conan take the opportunity to rest by a river near a large stone monolith. He is attacked first by snakes, then by bandits, and easily dispatches both, scattering the surviving bandits. Conan enters a small town, not realizing the bounty hunters have followed him, and have in fat allied with the bandits. A comely serving witch convinces Conan to return to the monolith at midnight, but her plan was evidently to feed Conan to the giant bat-demon that bursts from the structure. The creature attacks and kills the wench, but Conan kills it, which cause the locals to hail him as their king, to the delight of the witch Shaalu. Conan takes another tavern wench, Hacima, as his woman, and seems to take to his new life, until the witches reveal themselves and tell Conan his fortune was their doing, and that the former king disappeared searching for his child in another dimension. The witches claim the child was imprisoned because she was pure evil, and practically dare Conan to find the child. Conan decides he will, just because he can, and enters through a portal in the monolith, entering a dinosaur and monster-infested jungle land in which Conan spies a giant tower. He climbs the tower and finds the young girl, guarded by a one-armed ogre. Conan quickly ends the ogre's life and takes the frightened child back to the portal. When he returns through the monolith, he is ambushed by the bounty hunters and bandits, but defeats them, only to have the child revealed as a hideous demon who kills everyone in the town except for Conan and his woman in revenge for assisting in its imprisonment years ago. The creature leaves, and the witch Shaalu appears, furious that Conan made her lose her bet, which was that Conan would stay happy as a king instead of wander off. Conan promptly cuts her head off, but is unable to do so to Veena, who wisely vanishes in a puff of smoke. Conan and Hacima wander off.

Appearing in "The Debt of a Warrior"Edit

Synopsis for "The Debt of a Warrior"Edit