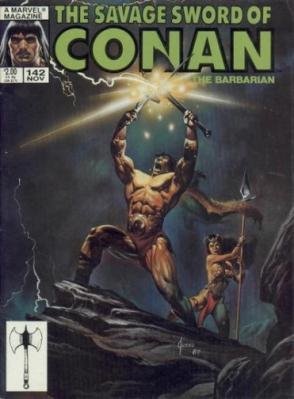 Fleeing the scene of calamitous defeat on the battlefield, Conan and his fellows discover a village of farmers who've been blinded by a cruel warlord. The Cimmerian and his hardbitten crew of barbarian warriors train the villagers for the warlord's return!

Retrieved from "https://heykidscomics.fandom.com/wiki/Savage_Sword_of_Conan_Vol_1_142?oldid=1451940"
Community content is available under CC-BY-SA unless otherwise noted.