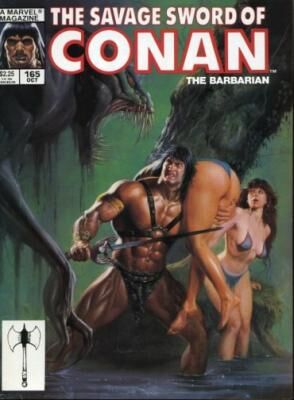 Appearing in "City of Rats"Edit

A young prince left in Conan's protection is brutally murdered. And not even overwhelming opposition will stop a blood-mad Conan from delivering an even more brutal revenge! Plus: King Kull and his men ride into a well-laid trap. When you see how Kull escapes, you will understand how a barbarian such as Kull could become king of legendary Atlantis!

Retrieved from "https://heykidscomics.fandom.com/wiki/Savage_Sword_of_Conan_Vol_1_165?oldid=1451963"
Community content is available under CC-BY-SA unless otherwise noted.