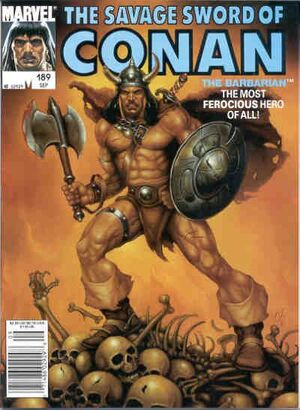 Appearing in "Eye of the Storm"Edit

Synopsis for "Eye of the Storm"Edit

Conan wakes up, chained, in the hold of a ship; he had been drugged by a bar wench. He quickly deals with his slaver captors and jumps overboard. He swims to the shore and goes to find a sword in the market. He is surprised and bemused to find what looks like his old horned helmet, which almost calls to him. He wanders around town for a bit, aware that he is being followed. He ambushes the people tailing him, and they say they were sent by the wizard Zukala. That night the wizard himself contacts Conan. Their previous encounter left the barrier between dimensions weak, and a sorcerer called Razal-Gulath plans to take advantage of the disturbance. Zukala, in his daughter Zephra's name, asks Conan to retrieve a magic jewel that is key to Razal-Gulath's plan. Conan agrees and finds his way to Gulath's castle and disguises himself as one of the evil sorcerer's hooded riders. He enters the castle with the other riders and finds the throne room. Razal-Gulath immediately senses Conan and teleports the barbarian into darkness, and Conan is attacked by a powerful, helmeted warrior. The warrior turns out to be Gaynor, and Conan manages to vanquish the undead soldier. Conan discovers he is in an underground cavern, and, after beating a giant squid and bat-creature, manages to find his way into a treasure room and a magical staff. Razal-Galath appears and blasts Conan with magical energy, but Conan is surprisingly unharmed, as Zukala had magically protected Conan's helmet. The feedback from the jeweled staff destroys Razal-Galath, and Zukala uses the magics to heal the dimensional barrier. Conan continues his journeys.

Appearing in "What Can One Man Do?"Edit

Synopsis for "What Can One Man Do?"Edit

Retrieved from "https://heykidscomics.fandom.com/wiki/Savage_Sword_of_Conan_Vol_1_189?oldid=1451987"
Community content is available under CC-BY-SA unless otherwise noted.