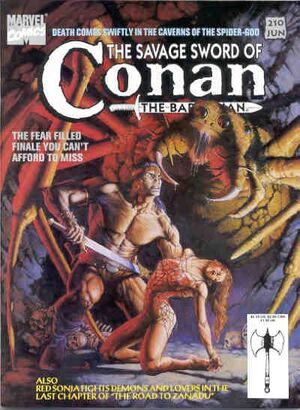 Appearing in "Children of Zath"Edit

Synopsis for "Children of Zath"Edit

Conan is interrupted in his drinking and brooding about Rudabeh's refusal to run away with him by the scholar Psamitek, who carries a message from Rudabeh to meet her outside. The girl is waiting, and offers herself to the barbarian, but then turns into a skeleton and Conan is attacked by an unseen assailant. Only the timely intervention of Captain Catigern, now on friendly terms with Conan and suspicious of Psamitek. The soldier had followed the two and both men realize that Psamitek is the one who has ben trying to assassinate Conan, attempting to claim the Turanian bounty. The scholar uses his magic to appear invisible, but Conan goads him into speaking, revealing his position, and Conan quickly stabs the man. The next day brings a great celebration at the temple of the Spider God, as the priests are hosting a Festival of the Gods, attended by the representatives of many religions. Conan takes advantage of the distraction to steal the gems on the statue of the spider god Zath, but is interrupted by Nial, who agrees to go with Conan if he abandons his plans for stealing the gems. Conan swiftly agrees, and he jumps into a hidden passage while Rudabeh distracts some nearby priests. Unfortunately, Conan runs right into the god Zath, a gigantic spider, and is forced to flee. Zath instead turns towards the newly arrived Rudabeh and kills her, infuriating Conan, who takes the girl's body through the caverns, but not before he discovers the priests' plans to wipe out the other religious representatives with an army of spiders. He discovers hundreds of those spiders in the caverns, and just manages to get out of the caverns before the spiders overtake him. His escape attempt, however, has caused a fire to start racing through the temple and the caverns, and the ground crumbles as Zath and hundreds of his children burst through the floor. to escape the smoke. The priest Feridun attempts to command the creature, and is successful until distracted by a coughing fit, at which point Zath kills him. Conan stabs repeatedly at Zath's leg until the spider's thrashing begins to bring down the temple walls, crushing all creatures that remain inside. Conan, tempted at first to leave, decides to remain to help the townspeople put out the raging fire. However, the discussion of the priests to start a religion around the ghost of Zath causes the barbarian to leave in frustrated fury, but not before he informs Rudabeh's family of her death. Liam blames and curses Conan, who leaves in great sorrow, as Liam cries into his mother's arms that he didn't mean it. Conan steals a horse and as he rides out of town, he sees Harpagus, his memory and life gone, and though he considers killing the priest, decides it's just not worth it.

Retrieved from "https://heykidscomics.fandom.com/wiki/Savage_Sword_of_Conan_Vol_1_210?oldid=1452008"
Community content is available under CC-BY-SA unless otherwise noted.