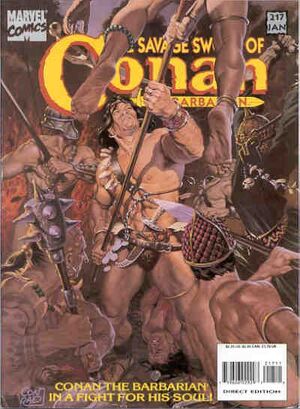 Appearing in "For the Soul of a Cimmerian"Edit

Synopsis for "For the Soul of a Cimmerian"Edit

In the Kothian province of Korveka, the elderly Baron Sabaninus plots with a man from Khitai to regain the appearance of his lost youth. In return for the death of a servant girl, who is fed to a demon, the Baron is de-aged. He decides to pretend to be his own nephew and the two men ride off on seperate missions. In Shadizar, Conan encounters a quartet of cutthroats attacking a rich woman and her lone bodyguard. Conan evens the odds and the thieves are killed. The grateful woman, Lady Khashtris, realizing that one bodyguard will not do in Shadizar the Wicked, hires the barbarian. Conan hopes that Kashtris's cousin, the Queen of Khauran, can help him get his soul back, a curse that can only be removed by royalty. After hiring a few porters, the caravan makes its way on the Road of Kings to Khauran, a kingdom under a curse which causes demon-children to be born to the royal family once each century. Several days later, Conan interrupts an assassination attempt on Khashtris and is rewarded by the grateful woman. When the party finally arrives in Khauran, Queen Ialamis grants Conan a boon in return for keeping her cousin safe. Conan explains his plight and asks the queen to free his soul ,over the objections of her advisers, once of which includes Sergianus, the young form of Sabaninus, the queen breaks the mirror. Conan's soul flies into his body, but the shards of the mirror form into a glass monster. Conan is surprised to see the form of an old man reflected in the creature where Sergianus stands, but takes little note of it while he's fighting for his life. He finally gets the best of the creature and defeats it.

Appearing in "When Walks the Living Wind"Edit

Synopsis for "When Walks the Living Wind"Edit

Retrieved from "https://heykidscomics.fandom.com/wiki/Savage_Sword_of_Conan_Vol_1_217?oldid=1452015"
Community content is available under CC-BY-SA unless otherwise noted.