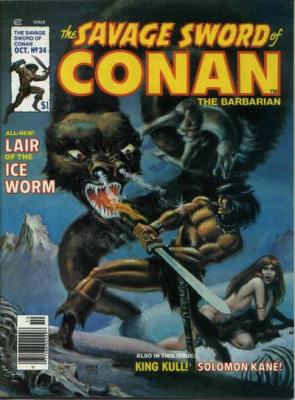 Appearing in "The Lair of the Ice Worm"Edit

Synopsis for "The Lair of the Ice Worm"Edit

Conan, leaving his Aesir companions, decided to head south through the Border Kingdoms and into Nemedia. In the snow covered passage he encounters a group of cavemen threatening a girl. He slays the cavemen, losing his horse in the process, and speaks to the woman, Ilga, whose tribe was ambushed by the cavepeople, her being the only survivor. Conan is forced to knock Ilga unconscious when he tries to take Ilga to the safety of a nearby cave and she has a panic attack. Conan takes her to the cave and lights a fire, and when Ilga awakens, calmer now, she and the barbarian keep warm in other ways. That night a musical sound and hypnotic eyes lure the girl deeper into the caverns as Conan. The next morning, Conan, noticing the girl is gone, searches the area and, when following a slithering trail emerging from a hole in the cave, finds his horse stripped of all flesh, and a little further along finds the skeleton of Ilga. Apparently, the girl's fears of going into the cavern rang true, and Conan recalls stories of a remora, a vampiric ice worm, that breathes cold instead of fire. Conan decides to get his revenge on the creature and fills his helmet with heated coals. He goes deeper into the cave and encounters the furry dragon-like creature, and hurls the helmet's contents into the creature's mouth as the creature begins to sing its siren song. The fire reacts with the ice worm's insides and, as Conan runs as fast as he can, the remora bursts in an explosion of ice and steam. Conan, blown clear of the glacier in the explosion, brushes himself off and heads south.

Appearing in "Moon of the Skulls Part One"Edit

Synopsis for "Moon of the Skulls Part One"Edit

Retrieved from "https://heykidscomics.fandom.com/wiki/Savage_Sword_of_Conan_Vol_1_34?oldid=1451832"
Community content is available under CC-BY-SA unless otherwise noted.