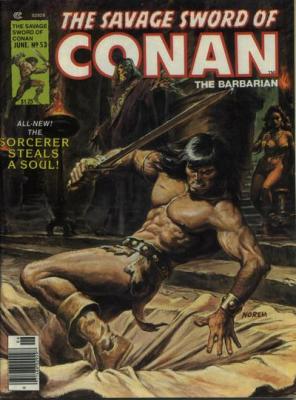 Appearing in "The Sorcerer and the Soul"Edit

Synopsis for "The Sorcerer and the Soul"Edit

Conan enjoys a profitable evening in Arenjun, pilfering several items of value from unsuspecting citizens. While enjoying the company of a wench named Kiliya later that night, he is interrupted by the woman's boyfriend, a captain of the city guard. Surprisingly, a tavern brawl breaks out. Conan is assisted by an elderly man who invokes the name of the Zamorian god of thieves in brotherhood, but the barbarian has no chance to thank the old man. Conan leaps out a window and scrambles onto the city roofs and manages to escape the watchmen. He stumbles across two thieves, Karamek and Isparana, discussing stealing a valuable amulet in two days. Conan decides he will steal it in one, and sneaks away before the thieves, oblivious to the spy, rethink their plan and decided to strike tomorrow. Part II: At the Keep of Hisarr Zul

Conan spends the day gathering information about Hisarr Zul, the sorcerer who owns the amulet, and that nights breaks into his house. He is surprised to see the old man who helped him in the tavern the previous night. The man is being attacked by three guards, and Conan leaps to his aid. The two defeat the guards and make introductions, but when Ajhindar, the old man, attacks Conan when he finds they are on the same mission, Conan easily knocks him down. He decides to spare the old man, but the point is moot when a trap door opens and asps come out, biting the elderly thief. With his dying breaths, he tells Conan to take the amulet to Kobad Shah, the king of Iranistan, who will pay more than any Arenjun fence. Conan continues his hunt for the amulet, and, in the treasure room, finds the thieves Karamek and Isparana. Conan kills Karamek but the woman gets away with the amulet, the Eye of Erlik. Conan becomes wedged in a trap floor, and is unable to move as Hisarr Zul himself arrives. Conan agrees to work for the wizard and retrieve the eye in return for his freedom. Hisarr Zul blows black lotus powder into the barbarian's face, knocking him out, and the wizard then proceeds to steal Conan's soul and trap it in a mirror. The slightest tap on the mirror causes Conan unbearable pain. Hisarr Zul gives Conan a replica of the amulet, a golden, jeweled scimitar. Stopping only to take a purse and dagger from the fallen Iranistani thief, Conan heads south after Isparana.

Appearing in "Wings in the Night Part One"Edit

Synopsis for "Wings in the Night Part One"Edit

Retrieved from "https://heykidscomics.fandom.com/wiki/Savage_Sword_of_Conan_Vol_1_53?oldid=1451851"
Community content is available under CC-BY-SA unless otherwise noted.