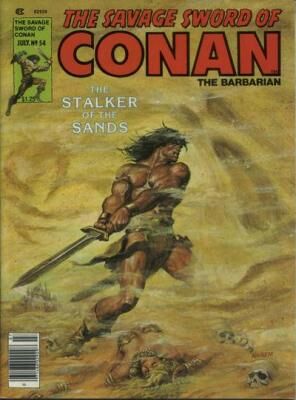 Appearing in "The Stalker Amid the Sands"Edit

Synopsis for "The Stalker Amid the Sands"Edit

Conan makes his way across the desert on the way to Zamboula, chasing Isparana and the Eye of Erlik. He stops at an oasis and is attacked by thieves. Conan swiftly defeats them and claims their stolen booty. It turns out that the thieves were being chased by soldiers of Samara, and, not wanting to cause a scene, Conan surrenders the booty to the soldiers in exchange for some information on a shortcut where he may head off Isparana. The soldiers, led by Captain Arsil, tell him of a haunted gorge in the Dragon Hills Conan might take, and then they take their leave, warning the barbarian of the evil sand-lich that lurks there. Conan finds the hills and gorge, and against the protestations of his horses, he goes inside. The animals finally break free of Conan and flee when the sands of the desert begin to coalesce and form into a hideous, ghostly creature. The sand-lich recognizes that Conan has lost his soul, and Conan explains that Hisarr Zul has stolen it, then lies and claims he is chasing Zul across the desert. The sand-lich releases Conan and reveals that he was once human - and Zul's brother, Tosya. Years ago, fleeing from the Khan of Zamboula, the two brothers camped in the gorge and Tosya, fearing that his treacherous brother would murder him in his sleep, arranged for his consciousness to remain behind if his body died. His suspicions were correct, and Hisarr left his brother to die, never knowing that Tosya's life-force merged with the sands itself. Desperate for vengeance, the sand-lich reveals to Conan methods for killing his brother then magically transports the barbarian to another oasis.

Appearing in "Wings in the Night Part Two"Edit

Synopsis for "Wings in the Night Part Two"Edit

Retrieved from "https://heykidscomics.fandom.com/wiki/Savage_Sword_of_Conan_Vol_1_54?oldid=1451852"
Community content is available under CC-BY-SA unless otherwise noted.