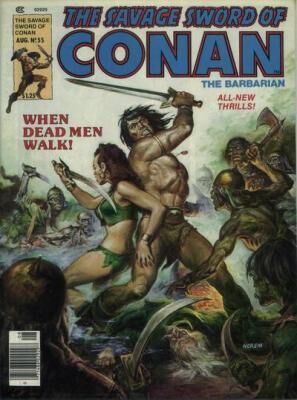 Conan sits in an unfamiliar oasis pondering his options when three travellers approach. The elderly man and his two children are very kind, and they give Conan some sorely needed information: the sand-lich Tosya Zul has deposited Conan two days' ride south of the Dragon Hills, well in front of Isparana. The travellers also warn Conan of the approach of possible slavers from Khawarizm, show Conan the proper care of camels, then take their leave. Conan hides in the palm trees, awaiting Isparana, and is not disappointed. He decides not to confront her, mostly because she strips down and bathes in the waters. When Isparana falls asleep, Conan sneaks forth and exchanges her Eye of Erlik with the copy Hisarr Zul gave him, then he takes her camels and leaves. At this point Isparana awakens and attacks the barbarian. The attack frightens the camels away, leaving the two stranded. They speak for a bit, and Conan realizes that the woman does not recognize him from Hisarr Zul's home. He lies about his reasons for being there, and they both settle in for what might be a long wait. Soon, the caravan from Khwarizm arrive at the oasis, and the caravan leader decides Conan and Isparana would make fine slaves. Conan shreds them, of course, but is surprised when Isparana attacks him from horseback. Conan falls to the ground unconscious, giving the slavers the opportunity to capture both him and Isparana. Several days later, the slavers, with Conan in chains, come across the Samaran patrol led by Captain Arsil. Conan calls for help, and the friendly captain confronts the slavers, forcing them to release Conan and the girl. Conan leaves Isparana in the soldiers' care and heads north to regain his soul. He confronts Hisarr Zul, and the wizard gives Conan the mirror containing the barbarian's soul. Hisarr then tries to kill Conan with a cloud of yellow lotus powder. The Cimmerian is too quick though, and blows the powder into the wizard's face first and flees the room. The wizard dies, and Conan, with the mirror safely hidden in his pack, burns the house down and leaves.

Retrieved from "https://heykidscomics.fandom.com/wiki/Savage_Sword_of_Conan_Vol_1_55?oldid=1451853"
Community content is available under CC-BY-SA unless otherwise noted.