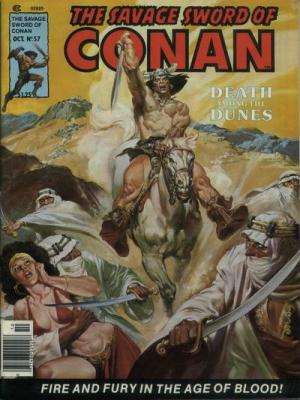 Appearing in "The Eye of Erlik"Edit

Synopsis for "The Eye of Erlik"Edit

With Khassek dead, Conan can think of no reason to continue the journey to Iranistan, so he and Isparana head towards Zamboula. In that country, however, Zafra plots with Chia, the mistress of Akter Khan, to spread rumors about a serving girl who was killed in the Khan's court, intending to spread discord. Meanwhile, Conan and Isparana encounter a group of nomads who demand Isparana. Conan bravely fights and whittles down most of their number, but all hope seems lost when a fresh group of nomads charges in on horseback. This second company, however, attacks the remnants of the first group. Although they have a common enemy, they are not necessarily the friends of Conan and Isparana, and take the two with them. Chapter II : Tents of the Shanki The riders, called the Shanki, take Conan and Isparana to their ancestral oasis home. There they meet the leader of the tribe, Akhimen Khan, and his son, Hajimen. The Khan is pleased that Conan dispatched a handful of Yog worshippers and is friendly towards the barbarian. He reveals that he has sent his eldest daughter as a gift to Akter Khan, who grew ill and died, but meets his other daughter Zulfi and his wife Aqbi. Back in Zamboula, Zafra and Akter Khan interrogate a spy in the service of Chia. Rather than suspect his mistress, Akter Khan believes she is working for the traitor Balad, and goes to find more spies to question that Zafra is only too happy to frame. The next morning, Conan and Isparana take their leave of the Shanki and are stopped by a pack of soldiers from Zamboula, sent to escort them to the city, as Zafra had already magically forseen their coming. A few days later they arrive in the city and present the Eye of Erlik to a grateful Akter Khan. Conan and Isparana dine and tell stories to the impressed Khan, who wants to make Conan a captain in his guard over the objections of Zafra. The craft wizard convinces the Khan to instead imprison Conan and Isparana as possible traitors. Meanwhile, as Conan meet with Hajimen, the Shanki reveals that he has heard disturbing rumors about how his sister died. She was not ill; rather, she was murdered in cold blood by the Khan, which is not far from the truth, as she was actually sacrificed to empower a magical sword. A mysterious man asks Conan to follow him to a secret location and the barbarian, his interest piqued, goes with him, and meets Balad, advisor to the Khan's son, and leader of the resistance. Word also comes that the Khan wishes to arrest Conan and has already captured Isparana. Conan disguises himself as a hunchbacked beggar and melts into the city.

Retrieved from "https://heykidscomics.fandom.com/wiki/Savage_Sword_of_Conan_Vol_1_57?oldid=1451855"
Community content is available under CC-BY-SA unless otherwise noted.