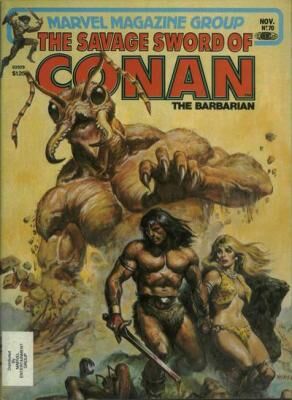 Appearing in "The Dweller in the Depths"Edit

Synopsis for "The Dweller in the Depths"Edit

Conan, riding into Meshken, is surprised to find the reputedly exciting town deserted. He is even more when he is attacked by dozens of enraged women, accusing him of being a demon who has stolen the men. As Conan gives serious thought to revoking his rule on harming women, the crowd is halted by the arrival of Fhala, a woman who has been out hunting for two weeks and was presumed missing. Conan takes the opportunity to unseat Fhala from her horse and ride away. Fhala catches up to Conan, and asks for his help in solving the mystery of the town, one that includes the disappearance of her father from another village some time ago. They travel to the home of the king of the province, Castle Vhalken, to start their qust, but are started to see that the rich castle has fallen into almost abandoned neglect. Soldiers, guards, and citizens have been vanishing from here also, and the treasury is mysteriously disappearing from the locked vaults. When the king discovers who Fhala's father is, he goes into a rage, and Conan and Fhala barely escape with their lives. Hours later, they come across a black, towering structure in a river bed, and Fhala is attacked by a horde of ants. They shake the bugs off by diving underwater, and witness a line of zombies carrying sacks of sugar into the structure - the men from the villages. They fight with one of them, and when the zombie is beheaded, a group of ants, apparently controlling the body like a puppet, pour from the body. The duo enter the structure and encounter creatures with the body of a man and head of an ant. Eventually, they discover the zombies have been giving the sugar to a hideous half-woman, half-queen ant creature, who is birthing eggs by the thousands. Exploring further, the two find Fhala's father, tied to a stake. They free him and he reveals the creature is his wife, Fhala's mother, who, in a quest for personal power and an army to call her own, left him to take up with the King of the province. When she found that life empty, and her husband tracked her down, their passionate reunion was discovered by the King, who left them both tied to stakes in the river to be eaten by the hordes of army ants. Unfortunately, the ants had recently lost their queen, and chose Meara. The tower was built up in the river, and a siren's call went out drawing nearby men who were killed, hollowed out, and controlled by ants. The ants have been tunneling into the King's treasury and spiriting away the gold, building a giant statue of Meara. However, even though she had physically changed, she needed a human male to create her full army, and so her husband was saved. Their first child, an experiment, was raised far below in the hive, and since then the ant headed creatures have steadily been birthed. The trio discovered and nearly overwhelmed by monsters, Conan chips away at the ceiling, letting the river flow in and destroying the creatures. As the humans make their way to the banks of the river, the tower crumbles and the first child - the thirty-foot long body-of-an-ant with a sort-of-human-head form of Thok burst from the ground. Conan manages to destroy the monster by toppling the giant statue of Meara on top of it.