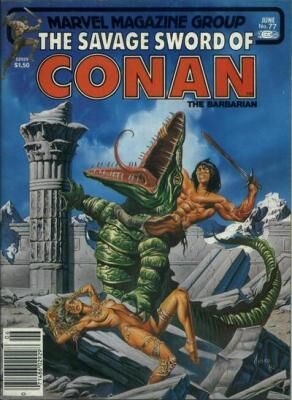 Appearing in "The Cave Dwellers!"Edit

Synopsis for "The Cave Dwellers!"Edit

Conan's dalliance with a mother-daughter pair ends when he defends a man against thieves. Unfortunately, the thieves turn out to be Shadizar guardsmen and the man a criminal. Both are thrown in the dungeon. The good news is that the man, Pharak, has been imprisoned numerous times and knows how to easily escape. The two flee and ride into the desert. They are pursued into the mountains, and the two thieves scramble into some caves. They cross many natural obstacles, and one giant spider, and make their way into a valley inside the mountain pass, complete with forest and ruined city. Conan spies two beautiful women about to be devoured by a giant lizard, and when he slays the beast, earns the gratitude of Darkon, ruler of the city. Darkon reveals that he himself controls the lizards secretly in order to keep the population frightened. When Conan acts disgusted with that, Darkon attacks the barbarian and tosses him in the dungeon. Once again, Pharak helps Conan escape and, after raiding the armory, Conan gathers the city's populace together and attempts to rally them against Darkon. They will have no such thing, though, and Conan is forced to fight Darkon's men and beasts alone. Darkon releases leopards, and, while one of them succeeds in killing Pharak, they ultimately are killed by Conan. A chase up a cliffside can only benefit the Cimmerian, and, in fact, as Darkon climbs up after Conan, he slips and falls to his death. Conan turns his sights towards Arenjun.

Retrieved from "https://heykidscomics.fandom.com/wiki/Savage_Sword_of_Conan_Vol_1_77?oldid=1451875"
Community content is available under CC-BY-SA unless otherwise noted.