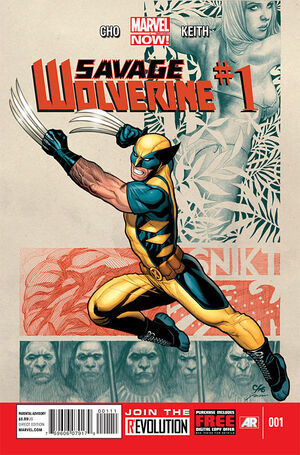 Wolverine awakes to find himself transported to the Savage Land and labeled public enemy number one! With no memory of how he got there, and Shanna the She-Devil his only ally, Logan must unravel the mystery that slumbers at the heart of the Savage Land before it finds a way to kill him first. This January, Wolverine is all brawls, babes, and brachiosaurs, and you'll never see the end -- or the future of the Marvel Universe -- NOW!

Retrieved from "https://heykidscomics.fandom.com/wiki/Savage_Wolverine_Vol_1_1?oldid=1645046"
Community content is available under CC-BY-SA unless otherwise noted.