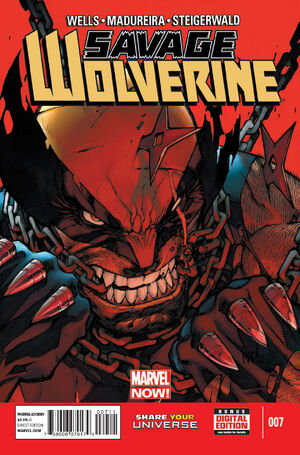 We spew sounds a' hate and hurt an' we tear each other apart. Healing factor or not... this is the kind a' fight that leaves scars, neither one a' us is gonna be the same. That's around the time I lock eyes with him, that's when I notice it... the sonnova bitch is smiling. Take me a second to realize... I am too.[...]There's a part a' me that want to tear flesh and rend bone. A part that would rather than think. Used to believe that part a' me was inexhaustible. That no one could could tussle with it with it long enough to find its end. I was wrong. There is nothing left. He's taken it all. I almost want to say thanks.

• Wolverine slices! • Elektra dices! • What more could you want in a comic?

Retrieved from "https://heykidscomics.fandom.com/wiki/Savage_Wolverine_Vol_1_7?oldid=1452052"
Community content is available under CC-BY-SA unless otherwise noted.