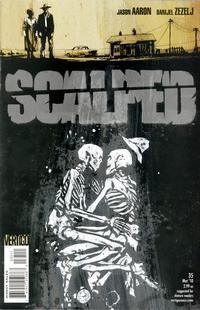 Appearing in "Listening to the Earth Turn"Edit

Synopsis for "Listening to the Earth Turn"Edit

It is winter, as Lakota elderly couple are struggling to walk back to their home in the countryside.

Flashing back to the past, the couple Mance and Hazel Beaz live far away from the Prairie Rose reservation and sustain an independent living, where their house is built near a gorge; in which according to Mance it is close to becoming as real Indians. However, given to their age, their living are close to becoming more difficult as the winter approaches. One day, Mance reluctantly decide to go into Prairie Rose for picking up food from a Nutrition Assistance program. After Mance arrive back, he finds Hazel has collapse. Hazel is suffering from kidney problems and have only been relying on a local medicine man rather than going to a hospital. Mance decide to go back to town for medicine, but Hazel wants to go with him as well.

Mance and Hazel were able to drive to a drugstore and diagnose the latter with the medicine. As they drive back on their pick-up truck, their ride breaks down in the middle of a road that is away from anyone living nearby. The couple are forced to walk back just as night begins to fall. On the way, Hazel trips as the cold overcomes her. Mance comfort by remembering how they first made love when they were young and admit he was afraid of growing up until he overcome it by realizing that he actually loved Hazel. And has since never been afraid. With this encouragement, Mance helps Hazel up and continue on their walk. They finally reach close to their home, but a F-35 jet suddenly crashes into their house, causing an explosion that blew away Mance and Hazel, but are unharmed.

At an unspecific time, it is narrated from Mance and Hazel that the pilot of the jet lost his way from the snow that caused the accident and killing the pilot. People from the United States Air Force were the first to arrive at the scene and took Mance and Hazel under their care in which helped the latter's kidney problems. Furthermore, the couple are greatly compensated. Their friends had suggested them to find a new home near town, but the couple kept their vigil and used their new-found money to rebuild their house.

Retrieved from "https://heykidscomics.fandom.com/wiki/Scalped_Vol_1_35?oldid=1517492"
Community content is available under CC-BY-SA unless otherwise noted.