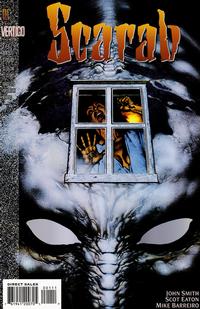 Appearing in "All Roads Lead to the Minotaur"Edit

Synopsis for "All Roads Lead to the Minotaur"Edit

Louis Sendak is a 78 year-old man with two secrets: he was a 1940s mystic hero named the Scarab and a door in his house is a magical portal to a labyrinth. The former secret has consumed his life and the latter has consumed his wife. These mysteries that have nested in Sendak's life were first infested by his father, some kind of wizard, who scavenged artifacts from the rooms beyond the magic Green Door (a reference to the famous pornographic film of the 70s). One of these artifacts was a football-sized scarab, called Scarabaeus, which bonded with Louis in October 1941 and transformed him into an insect man with special powers. He adopted the name The Scarab and fought a number of sorcerous threats during World War II, sometimes alongside Dr. Fate. His career ended in 1944 under circumstances that Louis cannot remember, but the magic green door is not so easily forgotten.

In 1956, his wife found the green door open and, tempted by its visions, she entered the Subtle Realms behind it. The door promptly closed and locked her away from our world for 40 years. Louis has spent the intervening years impotently trying to unlock the door, growing old alone.

In 1994, an assassin looking for the Green Door interrupted Louis' hermetic existence. He surprises Louse and uses his malleable surgical fingers to eviscerate him. Aroused by Louis' dying breath, the Scarab beckons to him. Sendak places the Scarab to his separated breast and is reborn as the Scarab. Meanwhile, Eleanor has found the exit to the Subtle Realms and the assassin severely injures her. Sendak uses his magical powers to deposit the assassin inside a jet engine.

Louis Sendak is probably a reference or nod to Louise Sendak, the children's author famous for the book "Where the Wild Things Are."

Retrieved from "https://heykidscomics.fandom.com/wiki/Scarab_Vol_1_1?oldid=1456870"
Community content is available under CC-BY-SA unless otherwise noted.