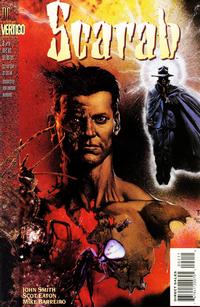 Appearing in "Lost and Found"Edit

Synopsis for "Lost and Found"Edit

Days after the attack, the wounded Sendak is tending for his wife. The green door now allows Sendak easy access and he keeps his wife there while he searches for her life force. She has disappeared in the maddening web of life - the Labyrinth.

The Phantom Stranger arrives to assist with Louis' "becoming." He warns Louis that the disasters are approaching and that the world will need the Scarab to survive. He helps Louis to remember part of his golden age career and intimates that they have meet previously.

Louis is told that the Scarabaeus is the sacred form of Khepri, the Egyptian deity of rebirth and creative form of the sun god RA. It is a key for unlocking human potential and is an aid to higher consciousness. When next he accepts the Scarab, Louis under goes a phoenix-like transformation: he returns to a physical age of 20, and all injuries current and former are healed.

Retrieved from "https://heykidscomics.fandom.com/wiki/Scarab_Vol_1_2?oldid=1456871"
Community content is available under CC-BY-SA unless otherwise noted.