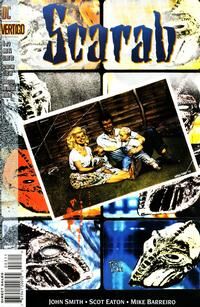 One fine summer day all the males in Whitehaven, North Carolina decided to walk into The Ocean and drown themselves. The women have a party. This unusual affair attracts the attention of Sidney Sometimes, a decadent and handsome journalist/new age huckster. He decides to investigate, but- as below, so above - the magic currents tease the Scarab who also journeys to Whitehaven.

They discover that women who have past puberty are four months pregnant, even those post-menopause. He also meets the last man alive, Marty, who escaped the mass drowning because he was laid up in the hospital with a broken leg.

Marty and the women tell Louis about the Ballantyre House. Marty doesn't reveal that a creature - the Rathorach - lives in the house. The Rathorach is the god Pan who has ritually consecrated all the men in town leading to their mass suicide. Marty slips away from Louis and tries to confront Pan, who is busy shagging the elderly Laura Ballantyre. Louis awakens to find Marty bloody and castrated.

Retrieved from "https://heykidscomics.fandom.com/wiki/Scarab_Vol_1_3?oldid=1456872"
Community content is available under CC-BY-SA unless otherwise noted.