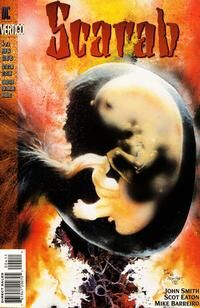 Appearing in "A Dawn Chorus"Edit

Synopsis for "A Dawn Chorus"Edit

Ballantyre was also a member of the weird Balkan cult, the SKOPTSKI, and she fused their rite of ritual castration with the satyr. The men were castrated on May Day and, according to Marty, they were told a secret that made them one with god, life and everything. They then went to the beach and committed suicide. Afterwards, the Rathorach slept with and impregnated all of the women.

The Scarab goes to the house and finds the Bacchanauts and is mystically attacked by them and their fetuses. Meanwhile, Sidney Sometimes joins the orgy. Scarab escapes the women and runs into an ambush by the Rathorach. Scarab easily repels the attack and the Rathorach reveals that it does not want a quarrel; it was merely jesting. The Rathorach is really the god Pan and has come to Whitehaven to die. The children are his bequest to the world - his spirit cast in new flesh - and Eleanor is to be their caretaker. He then dies before the Scarab's luminous eyes, but his spell breaks and the women begin to reconsider their divine conditions.

Retrieved from "https://heykidscomics.fandom.com/wiki/Scarab_Vol_1_4?oldid=1456873"
Community content is available under CC-BY-SA unless otherwise noted.