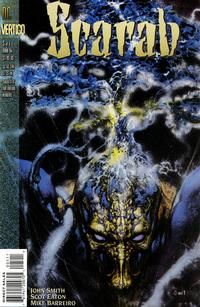 Jeff Coogan, old friend to Louis Sendak, takes a surprise turn down an alley and ends up in The Secret Garden (Eden). Jeff quickly learns that the garden hides terrible sights because it is really the Torture garden of U-Pe-Han, also Known as Lord Colouris, an angel fallen from eating too many apples from the Tree of Knowledge. Jeff Is caught by the angel's minions and turned in to a grotesque garden attraction.

Meanwhile, Louis returns home to find Eleanor growing ectoplasmic branches and he surmises that she is evolving into a new life form. His ministrations are interrupted by Mrs. Coogan, Jeff's Mother, who asks Louis to find her Son. Louis searches but can not find Jeff. Lord Colouris sends his minions to collect Eleanor, which leads Louis to the garden and Jeff. Lord Colouris and Scarab battle. Scarab literally unlocks Colouris with the aid of Jeff, who gives Louis the Key to the angel's corrupted soul. The unleashed force destroys the garden and Jeff, but returns Louis to the Subtle Realms behind the Green Door.

Retrieved from "https://heykidscomics.fandom.com/wiki/Scarab_Vol_1_5?oldid=1456874"
Community content is available under CC-BY-SA unless otherwise noted.