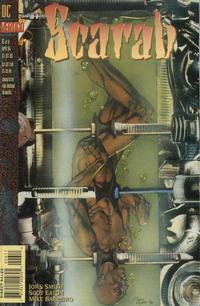 Appearing in "Scream Over Hiroshima"Edit

Synopsis for "Scream Over Hiroshima"Edit

Many months have passed and winter has hit Long Island. The Scarab has kept himself busy, confronting such deadly misfit threats as a TV haunted by the 20th century, Mr. Chigley and His Zoo of Shame, the Phantom Barber, The Electric Fetus Machine, etc. Eleanor's ectoplasmic secretions have grown into a mammoth tree. Just a regular season for the Scarab.

A much greater threat looms across the world in Russia as General Grushko and Room 19, an enclave of Russia's foremost thinkers, have started the trial run of the Gloryboys, young men with powerful psychic abilities. Room 19 is using the Gloryboys to test the military applications of a massive psychic scream left behind by the atomic bombing of Hiroshima. They decide to unleash the Scream on London, which attracts the Scarab. When he arrives, he is meet by Hilda Routledge, confectioner and part-time spiritualist, who tells Sendak that his wife is coming back.

Retrieved from "https://heykidscomics.fandom.com/wiki/Scarab_Vol_1_6?oldid=1456875"
Community content is available under CC-BY-SA unless otherwise noted.