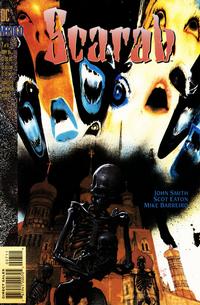 Appearing in "The Power and the Glory"Edit

Synopsis for "The Power and the Glory"Edit

The London test strike is a success and General Grushko aims the Gloryboys at their real target - the Peace talks occurring in Reykjavik, Iceland. The Gloryboys take over the General's mind and use him to murder the Russian enclave. The Scarab, with the help of the carnal Mrs. Routledge, teleports to the Russian think tank and kills the General, but not before Grushko turns the Gloryboys up to 11. Telepathic ecstasy engorges the Gloryboys climaxing in a massive release of the Hiroshima Scream. The psychic explosion is felt around the world resulting in a massive fissure between our world and the astral plane. Legions of phantasms spill into our world and the Scarab is unable to halt the discharge. In the midst of the chaos, two bizarre gentlemen appear: Booby Dazzler and Benedict Creed. The men are agents of the Cosmic Coincidence Control Center and they have come to fix the damage.

Retrieved from "https://heykidscomics.fandom.com/wiki/Scarab_Vol_1_7?oldid=1456877"
Community content is available under CC-BY-SA unless otherwise noted.