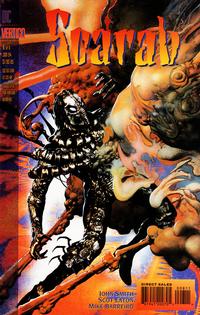 Appearing in "What the Rabbit Saw"Edit

Synopsis for "What the Rabbit Saw"Edit

The Hiroshima Scream has pushed the world to the brink of destruction but the beautiful boys from the Cosmic Coincidence Control Center are on patrol to handle danger. The men seem similar to the Scarab. They explain that they are 12-dimensional mathematical intelligences unfolded into linear time/space and work to safeguard the integrity of the World-Mind. The trio barely has time to exchange pleasantries before the Scream erupts more chaos, rousing the transformed Eleanor. Louis abandons Dazzler and Creed to return to Eleanor, who has abandoned her human form for one that combines the animal, vegetable and mineral. Louis enters Eleanor and the pair engages in spiritual sex. Their orgasm safely releases the pent up frustrations of the Scream thereby ending the threat. Creed retreats back to Cosmic Coincidence Control Center with Dazzler, who has been driven insane by the Scream. Eleanor and Louis have a post-coital discussion about the recent strangeness in their life and she explains that they have become a symbiotic pair: She is the mandala and he is the minotaur. Essentially, they are an organic mechanism for generating new creative urges in the consciousness of the world. With all threats overcome, the pair ventures behind the Green Door and conjoin again.

Retrieved from "https://heykidscomics.fandom.com/wiki/Scarab_Vol_1_8?oldid=1456878"
Community content is available under CC-BY-SA unless otherwise noted.