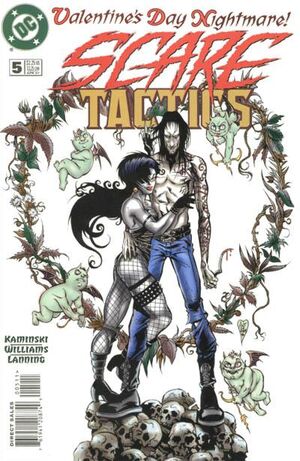 Shaddap and try to look harmless.

Fang, Gross-Out, Slither and Arnold Burnsteel are hitchhiking at the side of the road, due to the fact that their van with all their musical equipment and Screamqueen in her coffin were stolen.

The man who stole their van, Cain Van Zant, stops at a truck stop and gets a date with one of the waitresses. They go to a secluded spot for a picnic and he kills her.

The gang rents a car and goes in search of their van and Nina. They know that at dark she will rise from her slumber, because she is a vampire. They finally catch the van to find that Nina has awoken and befriended Cain, inviting him to come along with the group. Arnold argues with Nina that Cain is a serial killer, using his victims to construct pieces of art. During the argument, Phil says that Cain is a thief because he steals his work from his victims to make art. While they are arguing, Cain steals the rental car and drives away.

The gang starts driving again and get themselves lost on back-roads in the Appalachian Mountains. They stop the van and there are several sets of eyes watching them from the darkness surrounding the road.

Retrieved from "https://heykidscomics.fandom.com/wiki/Scare_Tactics_Vol_1_5?oldid=1456883"
Community content is available under CC-BY-SA unless otherwise noted.