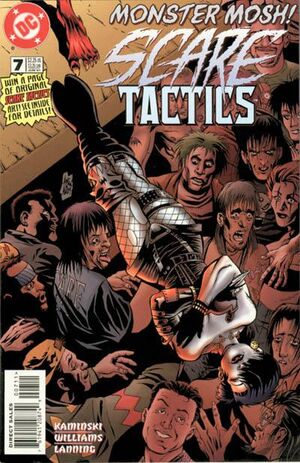 Appearing in "Symphony for the Devil"Edit

Synopsis for "Symphony for the Devil"Edit

Scare Tactics open up for Children of the Beast. During the Children's performance they perform a magic musical ritual from the occult Deus Requiem that transforms them into demons and opens a doorway to Hell. The Demon Entrigan is bound to destroy them, and Scare Tactics decides to help him out. During the fight Sid Vicious emerges from Hell and warns Fang about the power of music. The Demon destroys the Children of the Beast, and then Fate appears and stops Etrigan from getting his hands on the Deus Requeim.

Retrieved from "https://heykidscomics.fandom.com/wiki/Scare_Tactics_Vol_1_7?oldid=1456885"
Community content is available under CC-BY-SA unless otherwise noted.