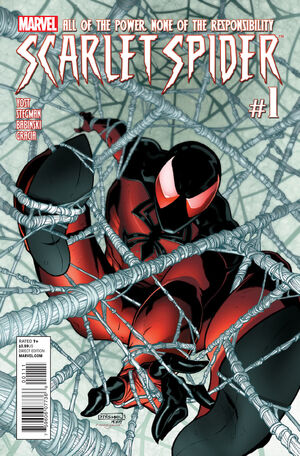 Appearing in "Life After Death"Edit

Synopsis for "Life After Death"Edit

A shady deal is going down in the Port of Houston, but one of the men involved spoke too loudly about it at a bar and inadvertently tipped off Kaine, Spider-Man's clone, about it, who is looking for money to get out of the country. He fights the goons while exercising his new powers, such as shooting webs and seeing in the dark. But during the scuffle, he gets a feeling in the back of his head that tells him to let them live, even though it goes against his nature.

With the goons taken care of, he takes the dufflebag full of money that was going to be used in the deal. However, as he leaves, he notices a smell coming from a shipping container and opens it, realizing that they were selling people, not drugs, and that they're all dead, except for one Mexican teenage girl.

Kaine takes the girl to Park Plaza Hospital and puts her in the care of Dr. Meland. Officer Wally Layton threatens him with a gun, but kaine disarms him and almost hurts him. Shocked at what he's done, Kaine tells them to go to the port and check out the shipping containers before leaving.

Kaine has been fleeingto Mexico for weeks but so far no one has come after him, so he decides to take a night off and decides to stay at the Four Seasons Hotel in Houston. He reflects on his past as an abandoned clone of Peter Parker destined to die of degeneration since birth. After years of being a villian, he eventually died to save Peter, then revived by his creator to be used as a monster in his schemes. Peter helped him return to normal but his dark past still haunts him, but now that he's not dying, he wants to be a different man, and starts by cutting his hair short and shaving his beard.

The next day, Officer Layton and several other cops are at the port and have laid out the dead bodies on the ground. One of the officers explains to Layton that this is a case of human trafficking but it is worse than usual. A man with glowing red eyes watches them from atop a container and calls for their attention. Meanwhile, Kaine is web-swinging across Houston when he is surprised by a crow, making him realize that his spider-sense and precognitive powers are gone. As he reflects on his plans when he gets to Mexico, he notices a car heading towards an old lady, which he stops by jumping on top of it and smashing it, but doing so gravely injured the driver.

Later on, Kaine is at the Four Seasons' bar being served alcohol by a bartender. On the TV, a news station is reporting police officers have been burned at the port and they are either dead or injured. Looking at his costume, Kaine decides not to get involved, believing he is not like Peter, and leaves.

At the hospital, the girl is being moved because the man that was at the port and attacked the police officers has come for the girl, who is named Aracely, and is capable of controlling fire.

•Who is the new webbed wonder – and why has he come to face corruption in Houston, Texas?

Retrieved from "https://heykidscomics.fandom.com/wiki/Scarlet_Spider_Vol_2_1?oldid=1452072"
Community content is available under CC-BY-SA unless otherwise noted.