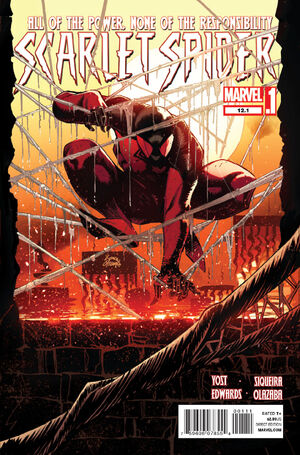 With great power must come great responsibility. That's one way to go. With great power also comes the ability to rain down hell on those who prey on the weak, people who couldn't fight the monsters. To stop people like me. I think that's the way I'll go.

• Kaine’s investigation brings him face to face with the Hand and Bruiser!

• What does Kingpin want with Houston?

• Chris Yost and Paulo Siqueira (The Amazing Spider-Man) will bring you the answers as a brand new year of Scarlet action awaits!

Retrieved from "https://heykidscomics.fandom.com/wiki/Scarlet_Spider_Vol_2_12.1?oldid=1452097"
Community content is available under CC-BY-SA unless otherwise noted.