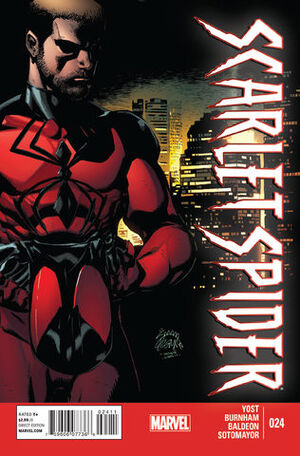 ... He's right. Everything he said, everything Kraven said... It's true. I fought super heroes... I killed people. For money... I even killed people I thought I loved.

• The stunning aftermath of Into the Grave has arrived!

• His encounter with Kraven the Hunter forced the Scarlet Spider to make some immense sacrifices. Now Kaine has to make a choice…one that may see him leaving his new life forever.

• Chris Yost, Erik Burnham and Carlo Barberi bring you the decisive moment in the life of The Scarlet Spider!

Retrieved from "https://heykidscomics.fandom.com/wiki/Scarlet_Spider_Vol_2_24?oldid=1452095"
Community content is available under CC-BY-SA unless otherwise noted.