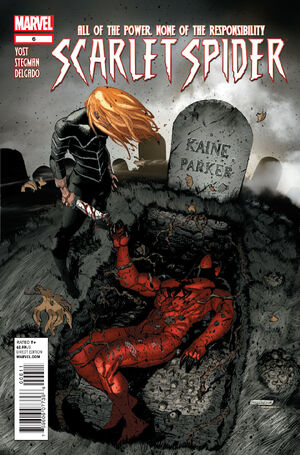 Appearing in "A Mighty Hunter Before the Lord"Edit

• The book everyone is talking about!

• Kaine goes from hunter to hunted as the daughter of KRAVEN THE HUNTER takes on the Scarlet Spider!

• From the pages of SPIDER-ISLAND, Madame Web crashes into Kaine’s life – with dark visions of his road ahead!

Retrieved from "https://heykidscomics.fandom.com/wiki/Scarlet_Spider_Vol_2_6?oldid=1658486"
Community content is available under CC-BY-SA unless otherwise noted.