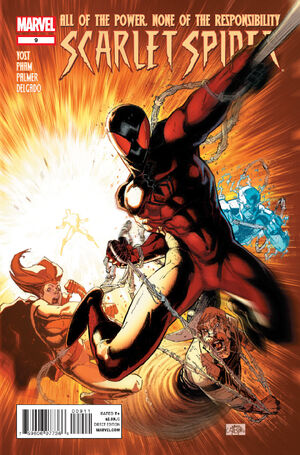 THE SECOND MASTER” PART THREE OF THREE • What has Roxxon’s greed brought down upon Houston? Mammon has been unleashed, and Scarlet Spider and the Rangers have no hope of stopping it. • Scarlet Spider’s biggest story yet comes to its deadly conclusion! • PLUS: A door has been opened at NASA’s Houston facility... and Scarlet Spider’s life will never be the same.

Retrieved from "https://heykidscomics.fandom.com/wiki/Scarlet_Spider_Vol_2_9?oldid=1752148"
Community content is available under CC-BY-SA unless otherwise noted.