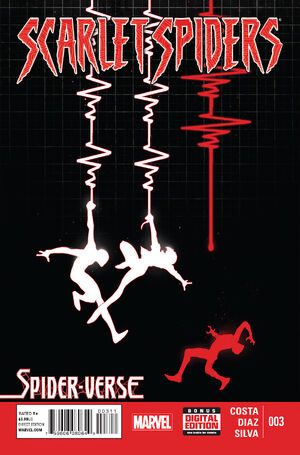 Hey, buddy. Glad you could make it. Wanna see what it feels like to lose?

• The Scarlet Spiders’ adventure through SPIDER-VERSE reaches its epic conclusion!

• With the fates of the Spiders from across the multiverse in their hands, can Kaine, Jessica Drew, and Ben Reilly stop Jennix and his machinations of destruction?!

• One of the Scarlet Spiders will have to make the ultimate sacrifice!

Retrieved from "https://heykidscomics.fandom.com/wiki/Scarlet_Spiders_Vol_1_3?oldid=1452100"
Community content is available under CC-BY-SA unless otherwise noted.