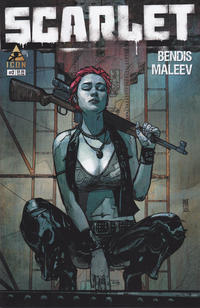 From the Eisner award-winning team that brought you Daredevil, Halo, and the Avengers comes another startling new chapter in their first ever creator owned series. You've met Scarlet and now you know who she is and what she wants... the world is a corrupt broken place and she is going to fix it. But how far is she willing to go? She is talking revolution right here in the United States!! But where does one start such a thing?

Retrieved from "https://heykidscomics.fandom.com/wiki/Scarlet_Vol_1_2?oldid=1471087"
Community content is available under CC-BY-SA unless otherwise noted.