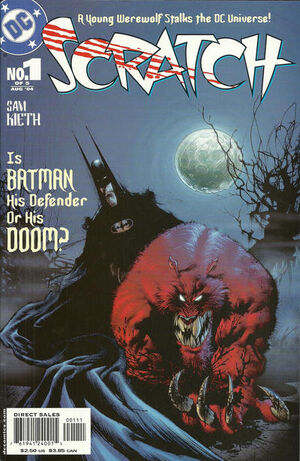 Can't risk anyone I care about seeing me burst into this thing, or they'd cart me away. Folks around here would probably think I'm the Devil or something.

Batman investigates rumors of a teenage werewolf named Zack. Studying the case, he reflects upon the boy's origins in his mind.

When Zack was fifteen years old, he developed a physical abnormality on his right hand. This abnormality grew until it ultimately affected his entire body, transforming him into a werewolf. The werewolf stalked the forests of his neighborhood hunting the local wildlife. The following morning, Zack realized what he had become and decided to leave home.

He found shelter in the cabin of a deformed young woman named Sage Perkins. Sage cared for two young orphans, who like her, suffered their own physical deformities. Local villagers distrusted the family of freaks, and their distrust only grew when the town sheriff suspected them of kidnapping a young girl.

Late one evening, Zack discovered that a hideous looking creature was responsible for the girl's abduction and was found outside their cabin. Transforming into the werewolf, Zack attacked the creature in an effort to rescue the girl.

Retrieved from "https://heykidscomics.fandom.com/wiki/Scratch_Vol_1_1?oldid=1470085"
Community content is available under CC-BY-SA unless otherwise noted.