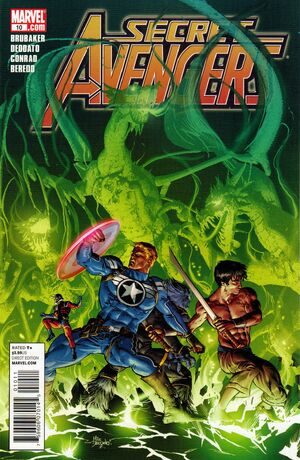 Appearing in "Eyes of the Dragon, Part 5"Edit

Synopsis for "Eyes of the Dragon, Part 5"Edit

Zheng Zu has prepared for the ritual to use Shang-Chi's lifeforce to resurrect himself. However, Moon Knight, disguised as a Shadow Council agent, gives the signal to the Secret Avengers, who set the drop on their foes. Steve Rogers fights Max Fury while Valkyrie takes on John Steele. The Prince of Orphans is then successfully able to interrupt Zheng Zu's ritual, preventing it from completing, causing the old mystic to turn to stone, which the Prince then shatters. The Shadow Council then leaves the temple, which begins crumbling like Zheng Zu was. The Secret Avengers are able to capture Steele after Valkyrie ran through his bullet-proof skin with her sword.

A week later, Rogers and Sharon Carter see Shang off. Shang admits that he's honored to have fought beside them and reminds them that they can always call on him for help.

Rogers then goes to The Raft, where Steele is being held. He tells Luke Cage that he's doing an off-books interrogation with an old friend and figure out why he's working with the bad guys.

Retrieved from "https://heykidscomics.fandom.com/wiki/Secret_Avengers_Vol_1_10?oldid=1738000"
Community content is available under CC-BY-SA unless otherwise noted.