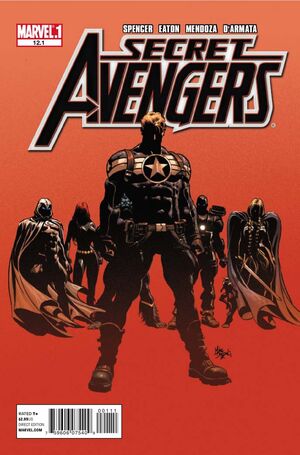 At the Swiss Fort Knox outside Gstaad, Switzerland, someone wearing a version of Steve Rogers' "Captain" costume breaks in and demands access to their computer systems.

An hour later, information regarding informants within major criminal and terrorist organizations who sell out information to the authorities, either for saving lives, immunity from prosecution or profit, are leaked to the media. Mister Negative tracks down one of these informants, a weapons developer working for him, Franklin, and kills him.

This is major concern to the Secret Avengers, knowing that the information their contacts have, most of whom are behind enemy lines, are in danger. Since they don't have time to extract all of them, Steve Rogers chooses to extract one: and AIM scientist and family man named Benjamin Abrams, who help stop a biological warfare attack in Boston, in the name of righteousness.

Black Widow goes to Washington undercover and openly threatens an AIM contractor for Abrams whereabouts. Once she's got the info, War Machine, Valkyrie and Ant-Man head to Abrams, location, where they find him tied up. Unfortunately, they learn that Abrams was in fact a decoy. His wife was the real asset. Moon Knight rushes to Abrams' house but is too late.

The "Captain" then starts recording a speech, stating that being molded by the events of the Secret Invasion and the Siege, he believes that those in charge should not consider themselves above the law and break public trust. But before he could publicly upload his speech, Rogers bursts into his hideout, stating that he's going about being the next "Captain" all wrong. "Captain" retorts that Rogers is nothing but a hypocrite. Once, back in the day, when the government tried manipulating Rogers into doing their bidding, he took on the identity of The Captain. Today, "Captain" sees nothing more than a government stooge who sells them out to terrorists, murderers and despots and leading Secret Avenger teams who answer to no one but him. Rogers then ruthlessly beats him up. As government soldiers rush in to apprehend "Captain", Rogers tells him that this isn't the first time he was called a traitor and his opponent believed he was righteous. But his position in the Secret Avengers is all about protecting the people. "Captain" or the rest of the world may not accept it, but it'll have to do.

Retrieved from "https://heykidscomics.fandom.com/wiki/Secret_Avengers_Vol_1_12.1?oldid=1655313"
Community content is available under CC-BY-SA unless otherwise noted.