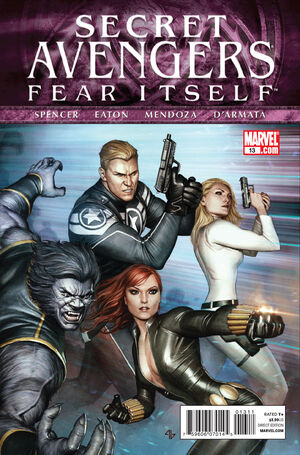 As Skadi begins her assault on Washinton D.C., the Quinncarrier drops War Machine, Beast, and Ant-Man onto the battlefield. Beast saves a soldier, who tells him Major Stephenson is looking for him. Beast meets up with him and is told that a Congressman has locked himself in the House Chamber and wishes to speak with him. Beast asks who this Congressman is and he is told it is Leonard Gary, an old friend of his.

Beast breaks into the House Chamber and asks Leonard why he's locked himself in. He says that before the attack he was about to introduce a bill he's been trying to bring to the floor for eight years.

Outside, the Abraham Lincoln Statue and Smithsonian exhibits come to life and join the fight. Beast begins to suspect that this isn't about Leonard's bill. He explains that the people are scared and he wants to show them that America is not afraid. He asks Beast to find a way to turn the cameras that were left behind on so that he can address the world. In return, Beast wants to know if Leonard is a mutant, believing he is what brought the Lincoln Statue and Smithsonian exhibits to life. He denies being a mutant but strongly hints that he is one.

Beast gets the cameras to start working and has them broadcast on every network all over the world. Leonard addresses the world by reciting the Gettsyburg Address. After he finishes, the Capitol Building is destroyed and he is consumed in the fire.

Retrieved from "https://heykidscomics.fandom.com/wiki/Secret_Avengers_Vol_1_13?oldid=1655314"
Community content is available under CC-BY-SA unless otherwise noted.