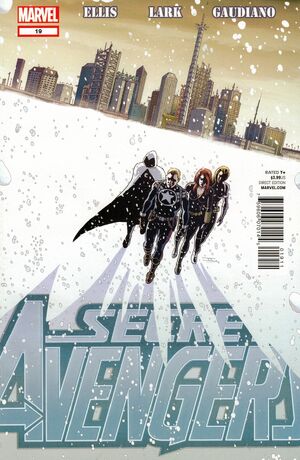 In a lounge in Aniana, Symkaria, Sharon Carter and Black Widow try to get into see a drug lord named Voydanoi but the doorman refuses them. As they retire to the restroom, a man named Mr. Grant is summoned.

Outside, an incognito Steve Rogers tries gaining access to the private door and fights the doorman. Upon defeating him, his opponent unleashes an explosion of energy. Rogers radios his teammates, informing them that he suspects that Voydanoi is selling a drug for supersoldiers to the Shadow Council and authorizes use of shocktoxin flechette guns. In return, Sharon confirms that Voydanoi is at the penthouse.

Meanwhile, Mr. Grant is revealed to be Moon Knight, who activates a jammer and hands a call girl a disguise and money, advising that she leave this place and never return. He then gets out of the room and use his fletchette guns to stun a guard. At the same time, Sharon and Widow get out of a restroom stall, ordering all other women to leave or be soldier to a rival cartel (Sharon shouts Doctor Doom or Al-Qaeda) before rushing out with guns blazing while Steve hits the fire alarm.

Moon Knight is in the fight for his life before confirming that their opponents are possessed, not on drugs, contrary to their preconceptions, before he is rescued by his teammates. The Secret Avengers then confront Voydanoi, who reveals that his drug came from bones in Transia neither human nor animal, said to contain multiple souls within them. By crushing the bones and inhaling the fumes, it enhances human abilities. However, Rogers suspects that these souls can be released with either mass poisoning or near-death but Voydanoi claims to be immune to those tactics. Therefore, Rogers lobs a bottle of alcohol at him before Widow throws an active lighter, setting him on fire. Moon Knight then gives him a hard kick, sending Voydanoi crashing out of the building and onto the ground below.