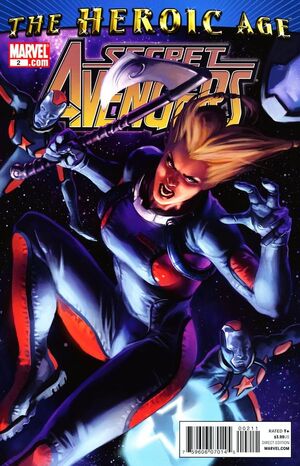 The next morning, Sharon Carter wakes up from unconsciousness to discover that her mysterious attackers have stolen the "Crown of Tentacles" and any security footage depicts a digital blur. Luckily, she is able to discover that Beast has found that the object has a unique energy signature that she can follow.

On Mars, the Secret Avengers investigate the abandoned Roxxon mining facilities. Black Widow determines from some footprints that someone has been here recently. Moon Knight has also found a cave full of skeletons. Steve Rogers then realizes that Nova must be in grave danger. However, the Secret Avengers are suddenly ambushed by the same company of soldiers who have been tailing them. They are able to disable most of their attackers except for two. Rogers tries reasoning with them to surrender and talk. But their foes say to each other, "We've failed the Lord of Shadows... we've failed..." and shoot each other in the head. Examining the others, they find that the attackers' eyes are pitch black, meaning that they are being mind controlled.

Heading outside, Rogers orders the team to split up: War Machine and Ant-Man will follow one set of rover tracks, Moon Knight, Valkyrie and Widow will "take the road more traveled" while he and Beast search for Nova.

Back on Earth, Nick Fury is informed that their squad on Mars has disappeared. Apparently, someone has activated the third crown. Fury then orders his subordinates to get to Mars and get him in contact with the Board of Directors.

Back on Mars, War Machine and Ant-Man investigate another abandoned facility. The latter soars through the corridors, before flying right into a mysterious portal.

Meanwhile, Rogers and Beast have located the cave where Nova was last located. They soon find Nova's helmet lying on the floor. Next thing they know, a massive brute named Archon bursts in, demanding the crown and asks if they would desire the end of all things.

Elsewhere, Moon Knight, Valkyrie and Widow have found Nova -- being controlled by the Serpent Crown -- and commanding countless workers into digging for something on Mars. Worse, he has spotted them and is heading right towards their location.

Retrieved from "https://heykidscomics.fandom.com/wiki/Secret_Avengers_Vol_1_2?oldid=1653195"
Community content is available under CC-BY-SA unless otherwise noted.